Atlanta Concert to be Livestreamed to Select TouchTunes Bars

On Tuesday April 30th, Jimmy Buffett will perform at the Aaron’s Amphitheater in Atlanta. If you’re not going to the show but are in certain select cities, you can enjoy the show streamed live via TouchTunes.

The following locations will stream the show:

Grab your friends and head to the bar! 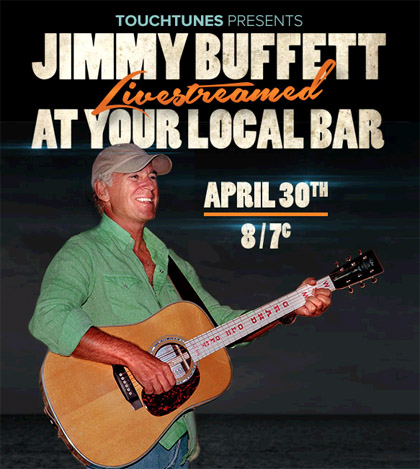 Originally launching the first fully digital pay-per-play jukebox in 1998, TouchTunes is present in over 57,000 bars and restaurants in North America, and is second only to iTunes in volume of paid music downloads. Fans play an average of 2 million songs a day on TouchTunes devices, accessing a growing library of 3 million hit songs as well as music by local, independent artists. The company grasped the power of the Internet, digital media, and touchscreens at the emergence of those technologies and has kept the name TouchTunes ever since in respect of that visionary moment.