Buffett and Wyndham Unveil Plans for Resort in St Thomas

Jimmy Buffett was in St. Thomas on Friday to unveil plans for the first Margaritaville Vacation Club. 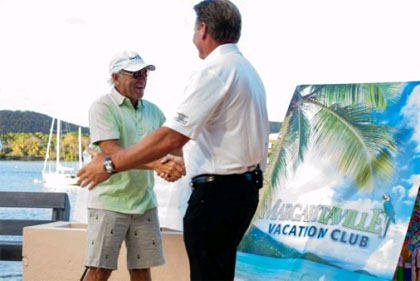 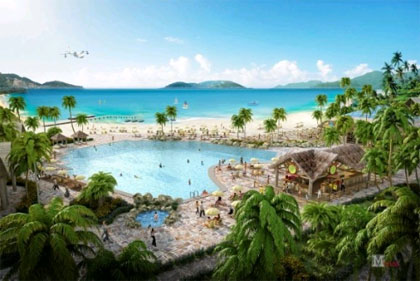 Buffett is partnering with Wyndham to open the 262-unit resort, located at the former Renaissance Grand Beach Resort in Smith Bay on St. Thomas.

The hotel property has been abandoned for years, and Wyndham plans to invest $90 million to transform it into the flagship Margaritaville Vacation Club by Wyndham property.

Friday’s reception took place at Penga, the Point Pleasant Resort restaurant that overlooks the site of the new Margaritaville resort.

Kicking off his flip-flops, Buffett picked up his guitar and sang three songs – “Boat Drinks,” which he said was inspired by a trip to St. Thomas; “Volcano”; and, of course, “Margaritaville” – to the small crowd as the sun began to set over Water Bay.

Buffett came to St. Thomas on his first sailboat in 1972, a boat he bought with the money he made from his first album. He lived on his boat at the old Sheraton Marina off and on for about a year, playing gigs in the area and making friends.

When the opportunity to bring his Margaritaville brand to the Virgin Islands arose, Buffet said, he jumped at the chance, seeing it as a perfect fit.

Buffett said the brand is about a lifestyle, and a way to connect with his fans – also known as “parrot heads.”

“We sell escapism,” he said. “They’ve been escaping through our music for so long, this is a real place on the beach, Margaritaville. It’s about appealing to the people who’ve been fans for so long.”

Buffett said he plans to buy the first four timeshare units at the resort so his musicians and crew can rotate through. Music will be a big part of the resort, with live acts playing regularly – maybe even Buffett himself.

Buffett currently lives on St. Barths and pilots his own seaplane, which he said would be very easy to land in Water Bay.

“You never know when I’m going to show up,” Buffett said, referring to the future resort.

Construction on the resort will begin in July. The first phase – which includes the main administration buildings, restaurant, common areas and the units by the pool – will take about 18 months to complete.