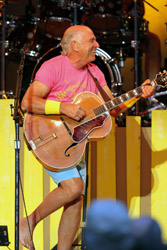 Jimmy Buffett played the second show of his This One’s For You Tour on Tuesday night at the Chastain Park Amphitheater in Atlanta, a venue he hadn’t played at in 27 years.

AccessAtlanta has a review of the show: “Jimmy Buffett douses fans with familiar songs, Atlanta tales”

“Why the hell not?” was Buffett’s reasoning for returning to Chastain after nearly three decades, and the same could be said about those who shelled out more than $250 for the best seats in the amphitheater. For many, a Buffett show is an annual ritual, and if foot-tapping along to the jaunty “Volcano” and the clip-clopping “One Particular Harbour” makes them happy…so be it.

While Buffett’s extensive chatting between songs was endearing to a point – and he customized his banter to Atlanta-specific tales – it also led to an even-keeled energy level that never escalated because of the continued pauses.

His introduction to the still-lovely “Come Monday” included a story about when, in his fledgling years, he performed a show at The Bistro on West Peachtree Street and “no one actually came.”

The tour continues Thursday night in Houston. Get tickets now!