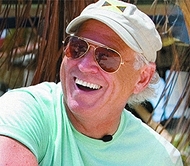 In an interview with Southern Living, Buffett talks about the Gulf Coast, writing “Margaritaville,” and what his mama taught him:

Was there a particular event that inspired the lyrics to “Margaritaville”?

I was with some friends in a Mexican restaurant on a hot day in Austin, Texas. We had a couple of margaritas and they really tasted good. The idea starting forming then. Afterwards I was heading back home to Key West. I wrote the song in about six minutes driving down the Overseas Highway. That was a good six minutes.

What’s the best thing your mama taught you?

Tolerance. She believed everyone should be treated equally.

My promoter had me playing my first show in Tahiti. It was a hula dancer from Hawaii, an Elvis impersonator from New Zealand, and me. No one there knew who I was, and we were having trouble selling tickets. I was going around and putting up flyers on every American boat I could find. The day of the show, all of a sudden an ocean research vessel appears. It’s from Gulfport, Mississippi, and filled with 150 marine biology students from LSU, Southern Miss and Ole Miss. They sold out the show!

Read the rest of the interview here.