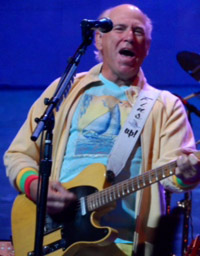 Jimmy Buffett and the Coral Reefer Band were on the road Saturday night for the first time in 2014, performing a show at the MidFlorida Credit Union Amphitheater in Tampa.

Buffett paid tribute to Jesse Winchester, who died on April 11th, with “Rhumba Man” and then “Defying Gravity” as the final encore song.

Buffett has three shows remaining on the Songs From St. Somewhere Tour: Raleigh on Tuesday, Charlotte on Thursday, and West Palm Beach on Saturday. Then in May the This One’s For You Tour kicks off in Virginia Beach. Find tickets now!

(thanks to Linda P for photo)