Jimmy Buffett and the Coral Reefer Band played an intimate show on Thursday night at the 600-capacity Belly Up in Solana Beach.

Thursday evening was a big night at one of San Diego’s oldest and best known clubs. Hundreds of fans packed the Belly Up in Solana Beach to see Jimmy Buffett perform. San Diego 6 went out to talk to some of the “Parrot Heads” who began lining up hours before the concert began.

“We party with a purpose is our motto. It’s just kind of what he stands for, you know helping each other,” said self-described Parrot Head Gail Folsom. Like many of the fans standing in line, Folsom had seen Buffett many times. But never in a place like the Belly Up. Buffett typically sells out stadiums that seat tens of thousands. The Belly Up holds a total of 600 people. “I’m really excited cause this is like the closest I’ll ever be to Jimmy Buffett I think,” Folsom said.

Here’s a shot of the set list from The Margarillas: 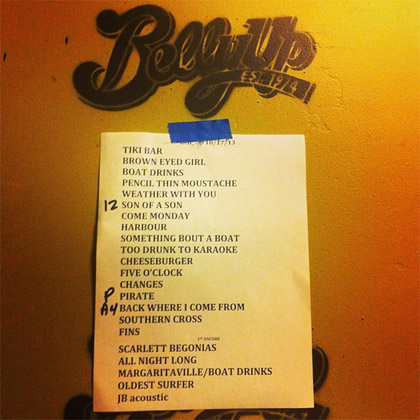