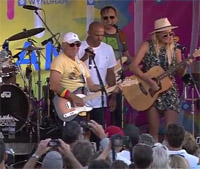 Jimmy Buffett was in Australia last week and played a couple small shows:

The first show took place at the Quiksilver Pro surfing competition at Snapper Rocks, where Buffett and band played an hour-and-a-half show in front of an estimated 1,000 people – believed to be one of the smallest shows the artist has played in decades. During the show he pulled surfing stars Stephanie Gilmore and Kelly Slater up on stage with him to help perform a few songs, watch them playing Margaritaville here.

Then, on Sunday evening, the Coolangatta Sands Hotel hosted Buffett and his band for a free show in what is surely the pub’s biggest ever Sunday session. Some rough footage from that show has emerged, and you can see it here.

“It was a big night, lots of interest, the phone was running off the hook for almost two days,” Ben Otter of the Coolangatta Sands Hotel told theMusic.com.au this afternoon.

Otter says around 400 crammed into the sold out room, with interest coming from throughout Southeast Queensland and Northern New South Wales. The venue didn’t have a lot of time to prepare for the onslaught, it all came together very much at the last minute.

“It was all very last minute, we knew about 36 hours before he played and we put it all together and he came,” Otter says. “We had it on good advice that he was coming and we met with his crew the day before, they’re a very efficient bunch of people.”