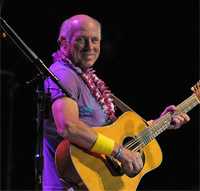 I asked Buffett, why are you doing Margaritaville TV? You’ve been airing your concerts live on Radio Margaritaville on SiriusXM for the past 14 years. Now that you’re adding video, aren’t you giving away the milk and the cow for free now?

“It is a logical step,” he said. “I like technology. I think there’s a lot of people out there who would like to see our show but can’t. They might be in secondary markets, or they don’t want to put up with the hassle of coming to a show.”

Buffett has been doing fewer tours, with fewer shows in fewer cities in recent years. Which means fewer people get to see the concert in person.

“I didn’t know it was going to last this long, at this pace. If you do the math, we’re only doing about 20 shows this year. I still like doing it, but I’m also 67 years old. I’ve had a good run. I’ve got a lot of things that I want to do that don’t involve me being on the road. With Margaritaville TV, fans can watch the show now.”

Buffett isn’t worried that people may stay home and watch Margaritaville TV instead of buying tickets and coming to his concerts.

“Tonight’s show is on TV. But you still see people scalping tickets in the parking lot. It’s the law of supply and demand. There’s still a lot of demand for our shows.”