Jimmy Buffett will be in Miami on Thursday night to co-headline an event with Gloria Estefan aimed at resuscitating Miami Marine Stadium, the site of his 1985 concert video Live By The Bay.

From the Miami Herald:

“I have my shameless promoter hat on now,’’ Buffett says, laughing as he exercises his fertile imagination on behalf of his latest cause: Helping to bring the iconic but weatherworn, graffiti-covered stadium on Virginia Key back to life after a prolonged dormancy of more than 20 years.

Buffett’s in league with another Miami musical icon, singer Gloria Estefan, the official face of a campaign to resuscitate the publicly owned stadium, which just turned 50 and is widely regarded as a cultural and architectural treasure.

Concerts at the marine stadium marked signal moments in the early careers of both stars, and they’re repaying the favor with a joint appearance Thursday at a sold-out fundraiser for the rescue effort at the Coral Gables Museum. After a talk-show-style Q&A with Estefan and NBC6 anchor Jackie Nespral as host, Buffett will do a few tunes with longtime steel-drum accompanist Robert Greenidge.

“The marine stadium was a pretty special place, and Miami’s always been great to me, so why not?’’ Buffett said, speaking from his Palm Beach County home. “I’m in the fun business and things that make people happy. The first time I played it, I fell in love with it. How could you not? You’re on a floating stage surrounded by people in boats, and those incredible sunsets. It was such a unique place to play in.”

Jimmy’s most vivid memory from playing at Miami Marine Stadium?

The time he jumped from the barge that served as a stage into the scrum of swimmers, boaters and floaters in the water at the end of one especially sweaty performance. He had played two shows, which had been preceded by a 56-piece steel-drum band from Trinidad, the Desperadoes.

“I remember very vividly,” Buffett said. “It was the perfect opening act. It put people in a rather festive mood. It was like being in a water carnival. There was space between the barge and the first seats in the grandstand. There were people swimming in there. It was not out of control exactly, but it was rockin’.

“No one expected that diversified amount of floating objects from large yachts to inner tubes. The size of the crowd in the water was amazing.

“It was also extremely hot. At one point, I told my stage manager, ‘When this thing’s over, take my guitar, because I’m goin’ in.’” 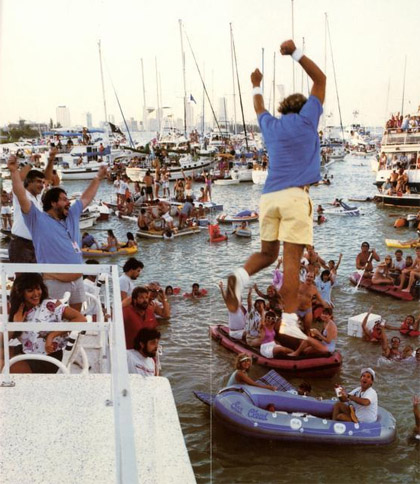