Buffett to Perform at Event for Miami Marine Stadium 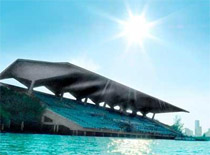 On January 9th, Jimmy Buffett and Gloria Estefan will appear at an event for Miami Marine Stadium where they’ll perform and discuss the legendary venue.

Few places capture the spirit of South Florida quite like Miami Marine Stadium.

From the roar of hydroplanes to dazzling performances on the bay, it was here that Miami turned its cultural heartbeat into a spectacle the world couldn’t resist.

Join us at the Coral Gables Museum on Thursday, January 9, from 6:30-10:30 PM as we relive those glory days with two legends who once graced the stadium’s dramatic floating stage – Jimmy Buffett and Gloria Estefan.

Hosted by the National Trust for Historic Preservation, this celebration will shine a spotlight on these two musical icons as NBC 6 anchor Jackie Nespral interviews the stars about their memories of the stadium’s past, as well as their hopes for its comeback as a world class sports and performance venue. Jimmy Buffett will close the evening with a short performance.

All guests will receive a one-year membership to the National Trust, as well as free admission to “Concrete Paradise,” the Coral Gables Museum’s critically-acclaimed exhibition dedicated to Miami Marine Stadium. Complimentary cocktails and heavy appetizers will be served throughout the evening. There will also be a silent auction featuring original stadium seats signed by the stars.

Proceeds benefit the National Trust’s work to restore the stadium, as well as our host for the evening – the Coral Gables Museum.

Important note: Doors will open for general admission at 6:30 PM. The program will begin at 7:30 PM, and seating will be unassigned. We expect the program to conclude at 9:00 PM. Afterwards, attendees will have free access to “Concrete Paradise” until 10:30 PM.

Miami Marine Stadium was the venue for Buffett’s Live By The Bay VHS, filmed in 1985.

Buffett has been lending his voice to preserving and reviving the venue for years. In 2009, he recorded this PSA: