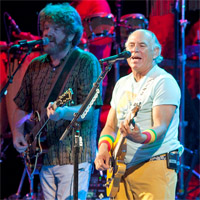 Jimmy Buffett rounded out the 2013 Songs From St. Somewhere Tour on Saturday night at the Waikiki Shell in Honolulu. It was the second of two shows played in Hawaii. The first, a charity show, was played at Jimmy Buffett’s at The Beachcomber restaurant on Thursday night.

The shows were not broadcast live, but were recorded and will air at a later date. Since we didn’t hear the show, we don’t have the set list yet. Submit it to us if you were at either show.

Our friend @nzbeautyeditor reports that Jimmy said during the show he’d return “Down Under” to Australia and presumably New Zealand in February. Caveat: he said that about 2013 too, so let’s hope he follows through in 2014.

The Honolulu Star Advertiser has a review of the show and a photo gallery: “Review: Jimmy Buffett at the Waikiki Shell”

As he’s done for quite some years here through a friendly relationship with Honolulu promoter Tom Moffatt, Buffett and his Coral Reefer Band begin touring in April and end here in the late fall, just before Buffett’s Dec. 25 birthday.

“Why wouldn’t you end in Hawaii? Duh?,” he asked rhetorically to roars of approval on a clear night with a moon just a sliver off full.

(His first concert here, he said, was as an opening act for the Eagles — now if that doesn’t date you! Buffett is 67.)

Saturday, Buffett and his 11-piece band (longtime musical director “Mr.” Mike Utley, plus instruments ranging from horns to slide guitar to congas and steel drums, and two female backup singers) had women whose senior proms were probably in the 1950s and ‘60s wearing sarongs and dancing in their seats, the aisles and wherever else the ushers would let them. Buffett crowds often have to be restrained — not from any kind of violence, but from an excess of enthusiasm — and Saturday was no exception.

Beach balls flew about as Buffett reprised vintage work and introduced new. You haven’t lived until you’ve been hit by a beach ball at a JB concert.