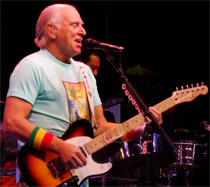 Jimmy Buffett and the Coral Reefer Band delighted parrotheads in Nashville with a couple rarely played songs, plus four new songs that will appear on the new studio album Songs From St. Somewhere.

For the first time in many years, the show opened to something other than “Hot, Hot, Hot.” A recorded medley of Buffett tunes led into a live version of “Kinja” to get things going. Early in the set, Buffett played a new version of “Morris’ Nightmare” (last played in 1999), followed by “Ringling, Ringling” (last played in 2000).

The first of four new songs debuted was “Something ‘Bout a Boat,” cowritten by Jerry Jeff Walker’s son Django Walker. Django joined Buffett onstage to perform the song. The other new songs were “Too Drunk to Karaoke,” “Useless and Important Information,” and a great Mark Knopfler tune entitled “Oldest Surfer on the Beach,” which Buffett closed the night with.

A more up-tempo version of “A Pirate Looks at Forty” also debuted, and shockingly the staple “Changes in Latitudes, Changes in Attitudes” was not played.

Buffett also paid tribute to George Jones, who passed away on Friday, with “Bartender’s Blues.”

The Songs From St. Somewhere Tour continues Tuesday in Atlanta. Find tickets to any of the upcoming shows here.

(thanks to Linda for photo)