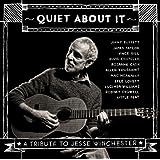 “You can’t talk about the best songwriters and not include him.” – Bob Dylan
“The word that comes to mind is grace.” – Elvis Costello

Jesse Winchester, a singer’s singer and a songwriter’s songwriter, died of bladder cancer on April 11, 2014, at the age of 69. His voice, by turns ethereal, sly, earthy, and heartbreakingly direct, delivered some of the finest songs of our time over more than four decades of live performance, and twelve original albums, including the forthcoming A Reasonable Amount of Trouble. His songs have been covered by artists as different as Jimmy Buffett, Elvis Costello, Reba McIntyre, Wilson Pickett, Waylon Jennings, Emmylou Harris, Bonnie Raitt and the Everly Brothers.

That wave of activity was brought to an abrupt halt in June 2011, when Jesse was diagnosed with cancer of the esophagus. He underwent surgery and a brief but difficult treatment, which he faced with extraordinary dignity and spirit. Amazingly, in August of that year he was pronounced cancer-free, and he resumed his performing schedule. During his illness, an all-star group of artists recorded an excellent tribute album of Jesse’s songs, entitled Quiet About It. Jimmy Buffett, one of Jesse’s biggest fans, was the driving force behind the tribute.