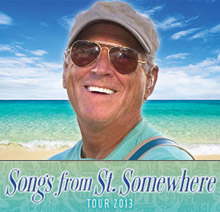 After high winds and cold temperatures forced him to postpone his Austin show for a day, Jimmy Buffett took the stage at the brand new Tower Amphitheater on Friday night for the first of two shows in the state of Texas in a 24 hour span.

View the set list for the Austin show here. The set list changed a little from the previous Songs From St Somewhere shows. Buffett dropped both “Useless and Important Information” and “Oldest Surfer on the Beach.” “Pencil Thin Mustache,” “Knees of My Heart,” and “Tryin’ to Reason With Hurricane Season” made their first appearances of the tour.

Buffett has a quick turnaround. He’ll play Frisco, Texas tonight. You can listen to the show live on Radio Margaritaville.

After the Frisco show, Buffett is off for over a month, except for the Boston benefit show on May 30th. The next tour show is June 22nd in Mansfield, MA.